A Day To Remember Josh Woodward Accused of Sexual Assault

A Day To Remember bassist Josh Woodard has been accused of sexual assault after a series of tweets resurfaced, detailing sexual assault of a minor at 16 years of age.

One tweet that has since been deleted (but not before being screen captured) shared that Woodard invited a teen to an after-party, knowing her age (16 at the time), and Woodard asked the tour manager to keep her best friend company, and then she was brought into another area in which she and Woodard had sex.

The accusations are coming from the 2011-2012 timeline, according to the accompanying tweet, but many have not heard about it until now. As time goes on, more and more sexual assault allegations are coming to light, and the music industry is no exception to the ugly unveiling.

Users on social media platforms like TikTok are policing and spreading the word in the comments when someone uses a song from ADTR, letting them know of the allegations. One user informed us via TikTok that there were multiple allegations, but we, however, could only find the tweet above, with accompanying tweets informing others of that specific injustice, and tagging ADTR in hopes they will respond. Not that one tweet or accusation isn’t enough, but since the original tweet has now been deleted, it’s hard to track further accusations as they arise.

While searching through Twitter for more potential accusations, older tweets show that this may not be the first time that Woodard has been accused of bad behavior.

remember when Josh Woodard of ADTR was accused of assaulting his ex-girlfriend at Warped? I still wonder if that's legit.

We will keep you informed as more information comes to light or if more accusations are released. A Day To Remember fans are tweeting and begging someone from ADTR to respond, release a statement, or to hear if Woodard will be dropped from the band.

As of right now, the band has not tweeted or posted to Instagram since June 8th.

Love to see the ADTR members posting normal stuff on social media today like they haven’t all been SILENT for 10 days after the rape allegations.

can’t bring myself to listen to @adtr anymore since the allegations against josh came out. they haven’t said shit and it’s been weeks. i don’t trust them, and i will no longer feel comfortable at one of their shows.

people jumping through hoops to defend josh woodard is so sad. apparently he's BEEN doing shit like this and i had no idea. and the rest of ADTR have to be covering for him because that's their boy. this fucking sucks

diehard fan of ADTR and since those allegations came out against Josh & the bands been silent about it since. I’ve stopped associating myself with them, why? Because we believe women and are holding them accountable no matter how much I loved them.

how many times can i put @adtr on blast for not addressing this situation with josh woodard? you can do better than this.

now we wait for josh woodard and adtr's response 🙁 what the fuck is wrong with the rock scene, it's sick

Today: Chris Fronzak of Attila and Josh Woodard of A Day to Remember accused of grooming and having sex with underage fans.

The threads are very well out there and The recent allegations against Fronzak has led to his ex-wife coming out in support of the victim.

— Giuseppe Stromboli and the briefcase of meatballs (@DanielWachtel9) June 19, 2020

Simple plan got their bassist removed within 24 hours of allegations being made public. What's taking so long @adtr @piercetheveil @BelmontChicago @SWStheband? pic.twitter.com/R4I5wANG4z

Hey @adtr you know what would be cool?
If y’all made a statement about the allegations against you guys so that way fans can decide on if we want to continue to support you or not. Radio silence isn’t cool.

just found out jeremy from ADTR blocked somebody for asking about the allegations against josh. my heart is broken. that man is my hero. this sucks. this really fucking sucks.

Officially done with adtr & all of its members. Unfollowed everyone in the band on all socials. They’ve had more than enough time to make some kind of statement and they’ve chosen to ignore the allegations instead. Pathetic and disgusting

ACRONYM ZINE strives to bring you the newest in Music, Politics, Pop Culture, and more by hunting down stories that matter most to you and those around you. To continue supporting ACRONYM, please visit any of our sections, share stories on your social media accounts, and make sure to like/follow us on the following sites: 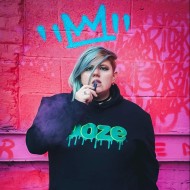 Ami's, AKA ACRONYM, experience ranges from photographer, writer, director, designer, events curator at select Detroit venues. She is fluent in Social Media strategy, promotions, and concert Reviewing photography with photos and bylines on 'High Times Magazine,' 'Merry Jane,' 'The Oakland Press,' 'The Macomb Daily,' and over 60 Beasley Media Group Radio Station sites across the U.S.. Keep up with her adventures at @acronymofficial on Instagram and Twitter.

I have been hoping that one day we’d see @theest

I encourage you to look up “Misheard Lyrics” o

Check the #linkinbio for our newest stories! 🆕

@eminem and @kidcudi are dropping a project tonigh